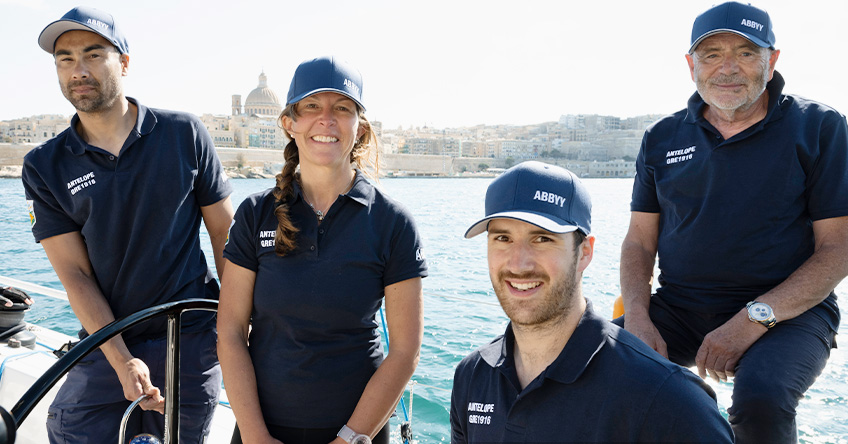 With an international crew navigating the open seas around two active volcanoes and six Mediterranean islands, ABBYY Chairman of the Board and seasoned yachtsman, Robert Youngjohns, will compete in the Royal Malta Yacht Club (RMYC) 42nd Rolex Middle Sea Race, the premier 606-nautical mile offshore race Saturday, October 23. Aboard the ABBYY Antelope, Susan Glenny will skipper the XP44 yacht with sailors from the United States, U.K., and Netherlands.

“We are excited to use the platform of sailing to promote ABBYY, the sport aligns well with our brand. Sailing is a technical sport, utilizing digital platforms and analysis to optimize performance and its participants and audiences fit well with our target groups,” commented Youngjohns. “ABBYY is a leader in digital intelligence for business process discovery and intelligent document processing. We are proud to be associated with this team taking part in the Rolex Middle Sea Race.”

The ABBYY Antelope is among a fleet of 124 yachts from 26 countries. The team includes members from the Club Swan 50 and Maxi class and is competing in the IRC 4 division. Glenny is a former member of the Irish Olympic sailing team and founder of Tigress Racing. She represented Ireland at the 2020 European Mixed Offshore Keelboat Championships in Genoa, Italy, skippered the first all-female team to complete the challenging Caribbean 600 race, and has skippered multiple Transatlantic Races. Additionally, Glenny was the highest scoring female skipper in the 2019 RORC Global Series Championship and her boat “Olympia’s Tigress” won the Edmund Whelan Trophy at Cowes week 2019.

ABBYY empowers organizations to gain a complete understanding of their business processes and the content that fuels them with its Digital Intelligence platform. ABBYY technologies are used by more than 5,000 companies, including many of the Fortune 500, and are recognized for their leadership in Intelligent Document Processing (IDP) and Process Discovery & Mining for driving significant impact where it matters most: customer experience, effectiveness, profitability, and competitive advantage. ABBYY is a global company with offices in 14 countries. For more information, visit www.abbyy.com/company/about-us and follow us on LinkedIn, Twitter, and Facebook.

ABBYY can either be a registered trademark or a trademark and can also be a logo, a company name (or part of it), or part of a product name of ABBYY group companies, and may not be used without consent of its respective owners.