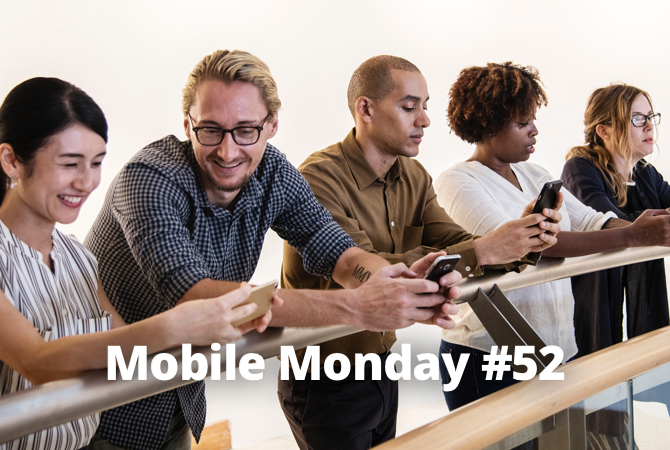 In today’s newsletter, we’ll talk about notable improvements and several new features that we think particularly worthy of your attention. We’ll also take a look at the newest version of Android and learn how to manage heaps of business cards.

We won’t review all of the new changes and additions, dwelling only on those that we think are really important. Here goes.

New 3D Touch options have been added to the Camera and Notes apps. Now when you 3D-Touch the Camera icon, you will see a new QR Code option. Pressing deeply the Notes icon, will open a new Scan Document option. We hope our readers know the best way to recognize their documents.

And in here we showed how you can use 3D Touch in the ABBYY apps.

To do this, tap Settings → Passwords & Accounts → Website & App Passwords, open the desired section, and tap the password that you want to share. A menu will pop up with the AirDrop command and a list of nearby devices.

You no longer need to memorize a new identification code or scramble jot it done down before the message disappears. The received code will appear above the keypad. All you need is tap the code to autofill the confirmation field. Previously, when you wanted to make a phone or FaceTime call from Messages, you tapped the icon of your contact and were directed to another menu. Now tapping a contact’s photo opens a quick menu from which you can make a call.

New “For You” tab and photo search

On the new “For You” tab, you can view your photos shot in a specific location or an a certain date when you were especially creative. iOS 12 will also ask you if you want to send photos to the friends that it has recognized on the snapshots.

This long-awaited feature groups notifications from apps. Now an important new mail or bank notification won’t be lost among a jumble of messages from other apps.

To view all notifications from the same program, simply tap one alert and the rest will slide out. Tapping Show Less will collapse the notifications again. We like it! 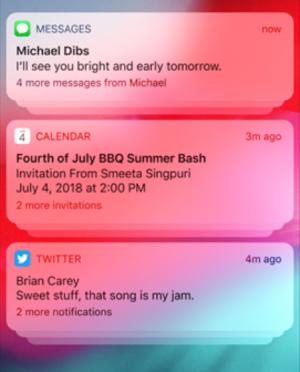 With the arrival of iOS 12, the Face ID feature has received a major facelift. There is now a new Face ID setting called “Set Up an Alternate Appearance.” This may be useful if you put on spectacles, a wig, a hat or any other accessories that may confuse the face recognition feature. Interestingly, you can even add someone else’s face (e.g. your friend’s) and they will be able to unlock your phone. Safari tabs on your iPhone X now look like normal browser tabs, allowing you to switch between tabs faster (this only works in landscape orientation).

The app appearance has received a major overhaul and received an uncluttered functional UI. The program now uses locations rather than dates for names of recordings. However, the most important change in out opinion is that the app now automatically saves your voice recordings to iCloud. This may be very useful for regular users like journalists, who can be sure that there recordings are safely stored in a cloud.

New way to close apps on the iPhone X

We never knew why Apple made closing apps such a pain in iOS 10. The issue has been remedied in iOS 12. Now you can close multitasking apps with an upward swipe.

Siri offers to make a call

Sometimes you may miss a call from an important contact and fail to notice a missed call alert. But Siri remembers everything and will prompt you to call that person back.

These are our favourite changes to iOS. Now you can add custom voice commands to apps to perform particular actions (provided these apps support the new feature). We’re also keeping up with the latest additions and are working on important updates for FineScanner and TextGrabber for iOS 12. Watch this space!

At the moment, there are not very many apps that support voice commands, but this is bound to change soon. In the mean time, you can try out new Siri commands in native iPhone apps.

ARKit 2.0 and the new Measure app

In iOS 12, Apple has made significant improvements in features and apps that use augmented reality, including improved face tracking, more realistic rendering, and detection of 3D objects. For more about augmented reality, please see this newsletter.

A new measurement app has been added to the stock Apple apps. Unsurprisingly, it is called “Measure.” This is a useful tool that uses augmented reality to make linear measurements.

Screen Time is yet another welcome addition to the new operating system. The feature will tell you how much time you spend with each app. It offers detailed statistics for all your phone activities and presents you with a list of most commonly used apps.

Screen Time also allows you to limit the use of certain apps and websites. Or you can lock all apps with the exception of the few that you actually need during a particular time period. This is quite handy in our experience.

In iOS 12, you can place group FaceTime calls, calling up to 32 contacts at a time! The implementation is quite unusual: the video window becomes bigger and moves to the forefront when the other person is speaking.

Animoji in the iPhone X

Finally, some additions that are intended purely for fun.

In iOS 12, four new animoji are available to iPhone X users—a ghost, a koala, a tiger, and a T-rex. In iOS 11, animoji played for a maximum of 10 seconds. Now users can record animojis of up to 30 seconds. As before, animojis can be sent to any iPhone model.

Apple has also revved up the TrueDepth camera, which, besides facial expressions, will now also recognize tongue movements.

You can also create a memoji, which is effectively an animoji that looks like you.

We think we’ve covered all the bases For more information, please see this page on the Apple website.

Ah, we almost forgot. Here’s a list of devices that can be updated to iOS 12:

Apple has been generous enough to include even the good old iPhone 5s on the list of eligible devices.

Now that we’ve talked about the latest OS from Apple, let’s review the new features introduced in Android 9.0 aka Pie. If you are not sure where you should update or not, here’s a brief rundown of the latest version released on 6 August 2018.

The operating system will look differently depending on your manufacturer. We’ll just mention the conspicuous deep notch at the top of the screen which was first introduced by Apple. The clock has moved to the left, while the signal strength and battery indicators have been shifted to the right. The ide is to make the clock and the indicators always visible, no matter how deep the notch at the top. Some Android phones had sported this fringe even before Pie was released, but now all developers can adapt their apps to work properly on devices with fringes.

If you unfold the notifications sheet, you will notice that they are now shaped as cards. The quick settings have retained their place at the top of the screen but have received a facelift. They use more colours and their icons have become more conspicuous.

Once more developers start supporting the new notifications in their apps, they will become even more useful and informative.

Now developers can implement in their apps a new AI response system powered by Google’s machine learning technology. It analyzes the text of a notification and offers three matching replies. How cool is that?  The feature works well in standard situations. For example, if you are messaging a friend and they invite you down to the local after work, the AI system will suggest replies like “OK” or “On my way”. 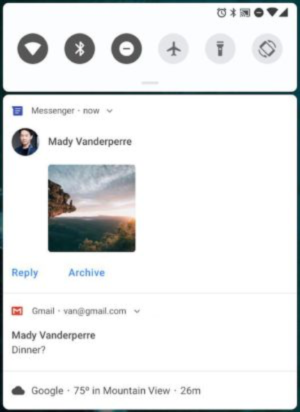 Now users can interact with their Android device with gestures. Gestures can be used to open the list of recent apps or the list of all installed apps. Google hopes that developers will readily implement gestures in their apps.

Support for HDR and HEIF technologies means that images will look better. HEIF (High Efficiency File Format) is a very effective compressions algorithm which makes your image files smaller while preserving the quality of your photos.

By the way, in an earlier issue of this newsletter we provided loads of tips on how to make professionally looking photos with your smartphone.

Android Pie phones will learn to save their batteries sparingly. The system will analyze your app usage and either switch rarely used apps to low-energy mode or close them altogether if it knows that you usually don’t need them at this time of day.

For more information about the new features in Android Pie, please see the official Android website. The supported devices are listed here.

If you are often visit conferences or trade shows or if you are an event organizer yourself, you will have lots and lots of business cards from people you meet there. We have produced a small and but very instructive video to share some tips on how you can store and manage your business cards on your phone.Click here to see the tutorial:

This is an organizer app for you and your other half. When you create an account, three tabs will become available, one for yourself, another for your spouse, and a third for both of you. 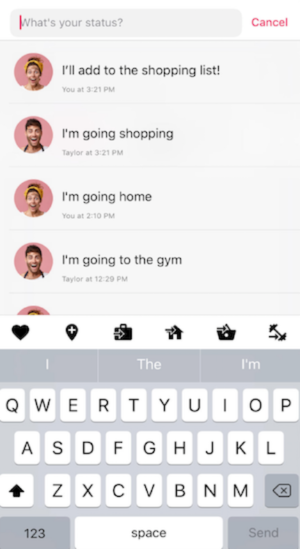 You can create tasks and keep a budget. Now one will be left behind. 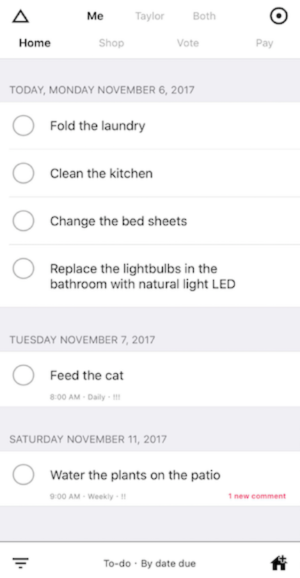 There lots of videos and online tutorials on how to organize business meetings properly.

Alas, people in many companies seem to ignore the simple rules suggested by business coaches and common sense. As a result, important decisions are delayed, the boss is unhappy, and the employees begin to regard all meetings a pure waste of time.

To keep it short, I’m going to share with you two simple rules that we observe and that seem to work for us.

If you are attending a meeting where you’re not just a passive listener but an active participant, make sure you know the subject. Also, formulate your thoughts on the subject. Otherwise you’ll find yourself thinking out loud while your colleagues wait for you to express your opinion.

Many people simply tune out when the conversion wanders to topics they know little about or of now particular interest to them.!

Negotiate with your colleagues how much time you are prepared to allot. If the discussion takes much longer than expected, you either need to further investigate the issue and convene a new meeting later or you have digressed from the main issue that you wanted to discuss in the first place. Don’t be shy to remind your colleagues the original purpose of the meeting.

See you next Monday